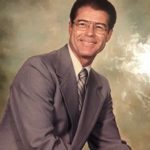 He was born on June 2, 1932, in Iredell County, N.C., to the late Wade Davidson Overcash and Sadie Kennerly Overcash. Mr. Overcash loved his family. He loved driving through the country and sharing old memories. He loved country music, classical cars, and was an avid NASCAR fan, especially Bill Elliott.

In addition to his parents, he was preceded in death by a daughter, Deanna Jowers; grandson Darrell (J.R.) Overcash; sisters, Louise “Sandy” Miller and Carolyn Brown; and brother, Hugh Overcash.

The family will receive friends on Saturday, January 25, from 10 to 11 a.m. with a graveside service following at 11:30 a.m. at Glenwood Memorial Park in Mooresville.

In lieu of flowers, memorials may be made to Gordon Hospice House in Statesville.

Cavin-Cook Funeral Home & Crematory, Mooresville, is serving the Overcash family. Condolences may be made to the family at www.cavin-cook.com.