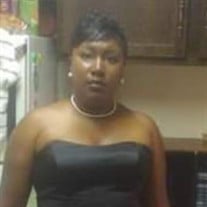 Brenda Katrina Gross was born Brenda Katrina Rhoney on January 7, 1966, to then Mary Ruth Rhoney and James Lewis Rhoney in Statesville, N.C. When Brenda (aka Nina) was around the age of three, the family moved to Baltimore, Md., where she attended Baltimore City Schools.

Brenda had a daughter Ariel Shonte Purdie, who preceded her in death. Brenda worked for Lowe’s Distribution in Statesville for a time, then she worked for DPI of Upper Marlboro, Md., before changing careers. She worked in healthcare before taking ill herself and having to retire.

Brenda loved life and all it had to offer, including helping raise her nephews, traveling and just being the “fashionista” as her family had called her. Brenda married Emanuel Gross in 2005 and although they lived apart, they remained close friends.

Also preceding her in death besides her daughter were her father, James Lewis Rhoney; her grandmother, Tommie Louise Winfrey; her grandfather, George Jennings; and her step-father whom she called dad, Michael Ralph Lackey.

She leaves to cherish her memories her mom, Mary R. Lackey of the home; husband, Emanuel Gross; her son, Marvin Lyle King Jr.; her nephews whom she help raise, Darian (Kara) Jones of Concord, N.C., Durad Jones of Statesville and Michael (Sasha) Jones of Statesville. Brenda had a special place in her heart for her cousin and niece, Tamnika Mayfield and Ceairria J. Turner. She also held a special place in her heart for Sheena Wellman. She is also survived by her siblings, Joyce (Willie) Alexander of Troutman, N.C., and Jay Rhoney of Glen Burnie, Md.; her step-brother, Patrick (Tabitha) Clyborn of Statesville; step-sister, Kenya (Robert) Clyborn Harris of Statesville; God-sister, Teresa Allison of Statesville; her special aunt, Laron (aka Tootsie) Satterfield; and her uncles that helped raise her, Rabb Mutakabirr (aka Uncle Bill) and James Hammons (aka Uncle Jim). Brenda had developed a new bond with her uncles Stanley Jennings of Atlanta, Ga., and Gregory Jennings of Ohio. She is also survived by a host of other nieces, nephews, family and friends.

The family will receive friends from 1 to 2 p.m. on Tuesday, June 15, 2021, at Greater New Mount Olive Church. A Service to Celebrate her Life will be held at 2 p.m. at the church with Elder Corey Rhoney officiating. Burial will follow the service at Belmont Cemetery in Statesville. At the request of the family, those who attend the services ask that facial coverings and social distancing are being practiced at all times.

Online condolences my be made to the family at www.nicholsonfunerals.com.