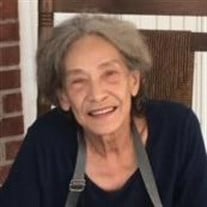 Phyllis Simmons Upright, 80, of Statesville, N.C., passed away on Wednesday, October 20, 2021, at Brookdale – East Broad in Statesville. Born on October 23, 1940 in Iredell County, N.C., she was the daughter of the late Walter Haskel Simmons and Blanche Naomi Moose Simmons.

Phyllis was full of life. She always had a great sense of humor that could place a smile on someone’s face. She had a joy for shopping, especially at Walmart. Until most recently, Phyllis was very active, having enjoyed taking trips to the beach and the mountains. She cherished her family and was a loving and devoted mother, grandmother, great-grandmother, great-great grandmother and sister.

In addition to her parents, Walter and Blanche Simmons, she was preceded in death by her son, Charlie Upright Jr.

A Memorial Service celebrating her life will be held privately at a later date. For those who wish, online condolences may be made to the family at www.nicholsonfunerals.com.

Nicholson Funeral Home has the honor of serving the family of Ms. Phyllis Simmons Upright.