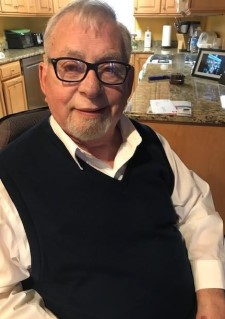 Born in Cleveland, Ohio, Billy was the son of Virginia Belle Poynter and Herbert Johns. He was a veteran who loved his country. He retired after many years of service at MetroNorth Railroad in New Haven, Conn.

Billy was a likeable guy who would give the shirt off his back to anyone in need. He was funny, sarcastic, and a social butterfly – he always had a joke or story to tell. He had a zest for life (go-kart & car racing, cross-country rides on his Honda Goldwing) in his day before falling ill several years ago. He was a tough ol’ bird who fought the hard fight!

He is survived by his spouse Luz and her mother, Cenaida Rodriguez; daughters DeAnna and husband Guy Drapeau of Rocky Hill, Conn., and Donna Rich of Wethersfield, Conn.; son William R. and wife Ruth Johns of Indianapolis, Ind.; grandchildren, Jackson, Ryleigh, Elizabeth, Mark, Seth, Gracie and Mariah; sisters Nancy, Susie and Cyndi and their families; and his beloved dogs, Jasper and Sammy.

He was predeceased by his parents; brother, Charlie; son Brian; and grandson, Matthew.

Memorial services will be scheduled at a later date due to COVID-19.

In lieu of flowers, donations may be made in his honor to the American Heart Association and/or Trinity Episcopal Church in Statesville, N.C.

Condolences may be left for the family, online at http://www.bunchjohnsonfuneralhome.com.

Bunch-Johnson Funeral Home is honored to be entrusted with the care of Mr. Johns and his family.