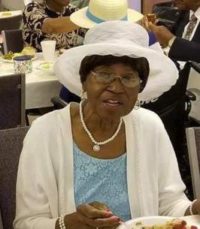 Mrs. Alma Jean Rankin Ivery, 86, daughter of the late Joe and Della Mae Wilson Rankin, was born in Rowan County, N.C., on July 22, 1935. She departed this life unexpectedly on Thursday, May 19, 2022, at Davis Regional Medical Center in Statesville, N.C.

Mrs. Ivery was a machine operator for Hoechst Celanese for many years before retiring in 1996. She was educated in the Iredell/Rowan County public schools and was a faithful member of Antioch Missionary Baptist Church in Cleveland, N.C. She was affectionately known as “Sunshine” by her church family. As a young child, she attended the family home church Mt. Tabor Presbyterian Church, USA of Cleveland, N.C.

Celebration of Life Services will be conducted Thursday, May 26, 2022, at 2 p.m. at Rutledge and Bigham Funeral Home. Members of the family will receive friends at the Funeral Home from 1:30 to 2 p.m. Reverend Maurice Lackey will officiate and Reverend David Leaven will deliver the eulogy, and burial will follow in Antioch Missionary Baptist Church Cemetery.

Visit the Book of Memories for Mrs. Ivery at www.rutledgeandbigham.com.

Rutledge and Bigham Funeral Home is serving the Ivery family.