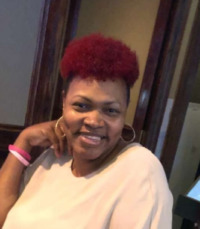 Ms. Anissa “Buffy” Chambers, 50, of Statesville, N.C., was born on May 2, 1972. She was the daughter of the late Willie O. T. Chambers and Geneva Brown. Anissa entered into eternal rest on Monday, July 18, 2022, at Iredell Memorial Hospital.

She graduated from Iredell County Schools and attended two years of college. Anissa was a member of New Covenant Bibleway Church of Statesville, where she was a member of Sister Gideon’s Band and Jubilee Gospel Singers. Her favorite hobbies included singing karaoke and cooking.

In addition to her parents, she was preceded in death by her brother, Otis Alexander; her sister, Sally Carr; and her grandchild, Azaree Jones-Chambers.

Celebration of Life services will be held Sunday, July 24, 2022, at Rutledge and Bigham, Statesville, at 1 p.m. with Co-Pastor Tosha Corpening officiating. Visitation will be held from 12 to 1 p.m. at the funeral home.

Visit the book of memories for Anissa “Buffy” Chambers at www.rutledgeandbigham.com.

Rutledge and Bigham Mortuary is serving the Chambers family.