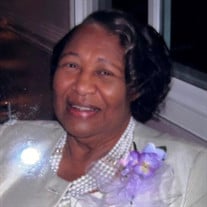 Carol Faye Reid Wright entered this world as the seventh joy to Jasper Reid Sr. and Mary Jane Williams Reid on February 14, 1943, in Catawba County, N.C. Despite the discrepancy with her birth date, she was always known as “The Valentine Baby.” She passed away January 19, 2022.

After graduating Unity High School in Statesville, N.C., she moved to Washington, D.C., where she lived for several years before she decided to join the Women’s Army Corps.

As a finance clerk, she traveled to Fort Wayne, Ind., where she met and married William Wright Jr. They then relocated to New York while both were serving military duties. Unfortunately, due to a debilitating auto accident, Carol was honorably discharged.

She then decided to move back to Iredell County to give birth to her only child, Carla Demita, and worked in the administrative field until her retirement. Carol also had several residential moves which included Charlotte, Greensboro, and Elon, which always gave her the inspiration to show her beautiful interior design skills. She gave her life to Christ in 1983 and she always continued to testify. She absolutely loved church, where she sang with the most powerful voice. Always the party and the host, she loved people, cooking, giving and conversation. She will always be missed deeply.

Carol was predeceased by her parents; her sisters, Hattie Curry and Kathleen Lewis; and her brothers, Jasper Reid Jr. and Oscar Reid.

Left to cherish her memory are her daughter, Carla Carter (Richard) of Greensboro; and her only grandchild, Channon A. Holmes of Atlanta, Ga.

She is also survived by her sisters, Mary Lee Campbell and Almeater Graham of Mooresville, Janice Gaither of Statesville, and Betty Bynum (Otis) of Portsmouth, Va., along with her brother, Bobby Reid of Troutman. She also leaves behind numerous nephews, nieces, cousins, and special friends, including Arnetha Jones of Statesville, Mary Horton of Charlotte, and Marsha Brown (Perry) of Landis, N.C.

She gained many spiritual relationships from many churches, including her last attended church at First Baptist Church of Statesville.

Services celebrating the life and legacy of Carol Faye Wright will be conducted at 11 a.m. on Friday, January 28, 2022, in the Nicholson Funeral Home Chapel with Rev. James Lewis officiating. The family will visit with friends from 9:30 until 11 a.m. at the funeral home. Burial will follow in the Iredell Memorial Gardens Cemetery.

The family would like to extend a special thanks to the W.G. Bill Hefner VA Hospital in Salisbury, Alamance Regional Hospital in Burlington, Wake Forest Baptist Hospital in Winston-Salem, and the Hospice & Palliative Care of Iredell County for the love, compassion, and care.

Condolences may be sent online to the family to www.nicholsonfunerals.com. Memorial gifts may be given to the benefit of the family and sent to Nicholson Funeral Home, 135 E. Front Street, Statesville, NC 28677.