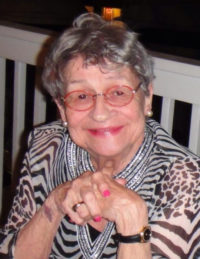 Our hearts are warm as we say goodbye to our beloved matriarch. She was known as “Mom, Bapoo, Auntie Lee, and Friend.” Her house was always filled with friends, family and music. This Queen of Song danced through life’s ups and downs. A tiny but mighty woman, she met any challenge with grace, dignity and flare. During her amazing life, she raised seven outstanding children. Lee felt a strong duty of volunteerism and community. She, along with her late husband Howard, were instrumental in establishing the youth football and cheerleading program in the City of Coral Springs, Fla., in the 1970s. The Rindermans also owned and operated Shoe Biz/Stride Rite shoe store. Upon moving to Mooresville in 2008, Lee volunteered at the Mooresville Soup Kitchen, where she became a friend to many. We will always remember her for her love of people, gift of gab, and her wit.

A celebration of life will be conducted on Friday, September 30, 2022, at 12 noon at Troutman Funeral Home Chapel in Troutman, N.C. Lynn Kunkle will officiate.

Those wishing to make memorials are asked to consider Gordon Hospice House in Statesville.