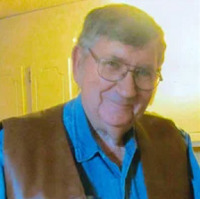 Edward was preceded in death by his beloved wife, Dixie Eileen Jurney Lackey.

Edward was a member of the Stony Point High School Class of 1960. In school, he was a member of the basketball team and the FFA. He received his associate degree from Mitchell College, where he was also a member of Mitchell’s choir. He then completed a rigorous apprenticeship in tool and die-making. Edward would rise at 1 a.m. every morning to milk the cows on his dairy farm in Stony Point. He would then head to work at Zimmer, where he was an accomplished tool and die maker. Edward was known for his hard work, soft spot for children, and being able to perform complex math calculations in his head. Once retired, he enjoyed spending quality time with his sons and grandchildren. He especially enjoyed sitting on his front porch and watching hummingbirds eat while he held one of his cats. He spent many weekends traveling in the North Carolina mountains with his wife or enjoying dirt track races with his younger brother. Edward was a faithful member of Stony Point ARP Church.