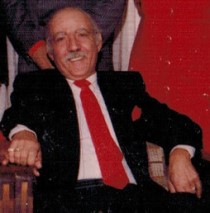 After his educational training, he served with the United Army and was honorably discharged. He was a member of the New Life Missionary Baptist Church in Troutman. He was united in marriage to Annie Marie “Mother Love” Falls Lowery Fonseca, who preceded him in death. In addition to his parents and wife, he was preceded in death by daughters, Loretta Fonseca Edgerton and Tawanda Magdeline Fonseca; and his siblings, Richard Fonseca, Manual Joseph Fonseca Jr., Robert “Bobby” Fonseca, Josephine Fonseca Correia, Patricia Fonseca DeSantos, Kenneth Fonseca and an infant sibling, Patricia Fonseca.

A Celebration of Life will be held on Wednesday, April 27, 2022, at New Life Missionary Church, Troutman, N.C. Visitation will be held from 11:30 a.m. to 12 noon, and Pastor Ivan Cowan will give the eulogy at 12 noon. Burial will be held at the National Cemetery in Salisbury, N.C., at a later date.

Visit the book of memories for Edward Roy Fonseca at www.rutledgeandbigham.com.

Rutledge and Bigham Funeral Home is serving the Fonseca family.