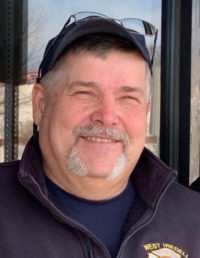 Mr. Rosenbalm was born in Catawba County on June 19, 1963, the son of Nola “Jean” Rosenbalm Benfield. He attended Statesville High School, where he played both football and baseball. Jeff was married to Kelly Parish Rosenbalm, who survives. Jeff was employed by Benfield Appliance as an appliance repairman and was well known in Statesville by his blue Dodge truck. He was a volunteer firefighter with the West Iredell Fire Department for 26 years.

Along with his father, John Benfield, Jeff was preceded in death by his sisters, Carolyn Plyler and Julie Wilhelm.

Those left to cherish Jeff’s memory include his wife Kelly; his mother, Jean; his sons, John (Ronda) Rosenbalm, Brandon (Eden) Rosenbalm, and Dillon Rosenbalm; his brothers, Robert (Debbie) Rosenbalm and Chris (Cynthia) Rosenbalm; his sister, Jeannette (Jim) Cox; his granddaughter, Ella Rosenbalm; and his step-grandchildren, Jordan and Drew Baker; along with the family golden retriever, Ben.

A funeral service celebrating the life of Jeff Rosenbalm will be conducted at 3 p.m. on Thursday, October 27, 2022, at First Baptist Church in Statesville. The family will greet friends at the church from 2 to 3 p.m. Burial will follow the funeral service at Oakwood Cemetery. Following the services, the family extends an invitation to all who wish to join for a time of fellowship and remembrance at the West Iredell Fire Department