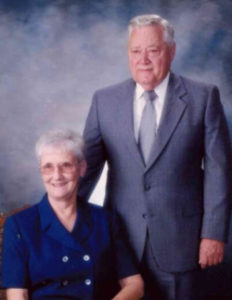 Thelma Whitener Lewis was born in Iredell County, N.C., on September 4, 1929, the daughter of the late Robert Earl Whitener and Mamie Mills Whitener Davis. She was a graduate of Troutman High School and was a bookkeeper for Modern Electric in Statesville, N.C.

In addition to her parents, she was preceded in death by two brothers, Carl Whitener and Robert Whitener; a sister-in-law, Lucy Whitener Miller; and a great grandson, Thomas King.

Dewain Dwicker Lewis was born in Guilford County, N.C., on November 17, 1929, the son of the late William Mitchell Lewis and Junior James Lewis. He graduated from high school after attending Troutman High School and was the Data Processing Manager for Colt Industries in Davidson, N.C.

In addition to his parents, he was preceded in death by a brother, Grady Lewis, and a great grandson, Thomas King.

Graveside services celebrating the lives of Thelma and Dewain Lewis will be conducted by Reverend Jeff Hamrick at 2 p.m. on Sunday, October 30, 2022, at Troutman United Methodist Church in Troutman, N.C.

The family would like to express their sincere appreciation and thanks to the full staff at the Hospice House of Mooresville for their constant care of Thelma and Dewain and for allowing them to be together during their passing.