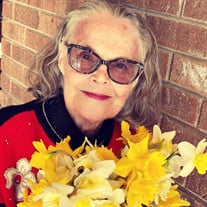 Veda Rogers had a strong faith in God and was a member of Fairview Baptist Church in Statesville. She was a sales associate at various department stores, including Spainhour and Belk from which she retired. She had a passion for bird watching and gardening. She loved and cherished her children, grandchildren, great-grandchildren, nieces and nephews.

In addition to her parents, she was preceded in death by her husband, Jack Rogers; her two grandchildren, PV2 Diamond J. Kennedy and Kaitlyn Rogers; her sisters, Juanita Crouse and Darelyne Money; and her brother, Walter McLeod.

Services celebrating the life of Veda Rogers will be held at 2 p.m. on Saturday, June 18, 2022, at Fairview Baptist Church with Dr. Scott Eanes officiating. The family will receive friends in the sanctuary for one hour prior to the service. Burial will follow in the church cemetery.