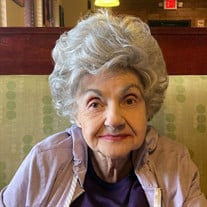 Marilyn Fay Bradfield Mure, 89, of Statesville, N.C., and formerly of Buffalo, N.Y., passed away peacefully with her son and daughter-in-law by her side on Thursday, January 19, 2023, at Iredell Memorial Hospital.

Born on October 30, 1933, in Buffalo, N.Y., (Erie County), she was the daughter of the late Sedrick Bradfield and Marie Pucci Bradfield.

Mrs. Mure lived in Buffalo for 87 years before moving to Statesville in 2021 to be close to her son, Joe. She was a loving wife, mother, and grandmother.

In addition to her parents, Sedrick and Marie Bradfield, she was preceded in death by her husband of 20 years, Joseph Mure; her sister, Sharon Kay Spagnuolo; and her nephew, Shawn Spagnuolo.

A private Celebration of Life Service will be held at a future date at The Salvation Army of Iredell County.