The road to California has been fraught with flat tires, wrong turns, a downpour and a couple of insect bites.

For participants in the Precious Medals’ journey from North Carolina to California, there have been a few bumps in the road during the first three days of the eight-day trip. But there has also been strawberry shortcake, lamb chops and plenty of gratitude along the way.

Traveling by motorcycle and RV, the group departed Statesville on Memorial Day, carrying the military service medals of World War II veteran Coy William Goins to relatives in Los Angeles. The medals, which were found in an antique shop in a cheap cardboard case more than two years ago, will be repatriated on June 6 during a ceremony at the Hollywood American Legion Post 43.

After breakfast at La Quinta in Cookeville, Tennessee, the travelers hit the road about 9:10 a.m. Tuesday. The first couple of hours were smooth sailing and the caravan pulled into Nashville in time for lunch at the Farmer’s Market, a trendy spot near the Tennessee World War II Memorial and the Bicentennial Capitol Mall. After posing for a few photos, it was back to I-40. About 2:50 p.m., while traveling along a busy stretch of the interstate, the RV ran over a road hazard. There were two loud “bangs” and a “boom” as a rear tire blew out and the hazard smashed into a storage container and the travel trailer containing gasoline cannisters and miscellaneous supplies.

Kim Siegrist, who co-founded Precious Medals with her husband Roger to support active-duty military service members and veterans dealing with PTSD, expertly pulled the RV to the side of the road and then assessed the damage before deeming the RV safe enough to drive the vehicle to the next exit, where the motorcycle riders were waiting.

“If it wasn’t an adventure already, it is now,” Roger Siegrist declared after inspecting the damage to the tire, RV and trailer. About 90 minutes later Robert Archer, a service adviser for Love’s, arrived on the scene with a new tire and all of the equipment needed to remove and replace the shredded tire.

Despite the sweltering heat, Archer was a one-man pit crew and had the travelers back on the road by 5:20 p.m. That road hazard cost the group two and a half hours — and the repairs put an $860 dent in the budget.

About four hours later, the group pulled into the Econo Lodge in Forrest City, Arkansas, ending the day’s 370-mile trek. Tuesday ended with take-out from McDonald’s and a little uneasiness about the low-budget accommodations.

If the Precious Medals journey had ended in Yukon, Oklahoma, it would have been a success.

The fact that two active-duty personnel drove nearly 10 hours round trip to meet up with the group and learn about Coy William Goins’ military service lifted the spirits of the rain-soaked riders and helped ease the sting of an assortment of insect and spider bites inflicted on the travelers during their stay in Forrest City, Arkansas. 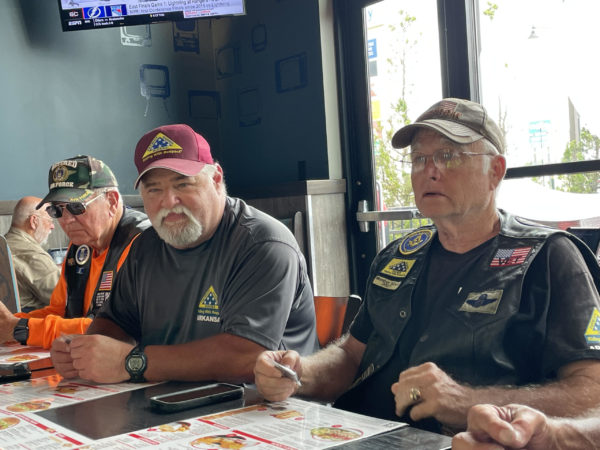 Earlier Wednesday, the caravan was escorted across part of Oklahoma by two members of the Patriot Guard.

Joe Maglie, a retired Marine and National Moderator for the Patriot Guard, and Fred Hare, a retired Air Force loadmaster, joined the travelers for lunch in Conway.

Their reverence for veterans is evident in their commitment to military families. Both men have participated in hundreds of funeral services for veterans over the years.

Just this week, Maglie assisted in the service for the last Arkansas service member who survived the Japanese attack on Pearl Harbor.

And Hare signed up to provide an escort for the Precious Medals group despite battling throat and kidney cancer. After lunch the travelers made a quick stop in Okemah, Oklahoma, where they were greeted by Shawn Bentley, commander of American Legion Post 123. He praised the group and offered to support the mission.

After a quick tire change to one of the motorcycle trailers, the group was back on the road.

At 6:45 p.m., after riding more than 80 miles in a steady rain, they pulled into Yukon, Oklahoma, where they were met for dinner by Command Sgt. Maj. Jeffrey D. Barker and Sergeant First Class Nathan J. Banninger. 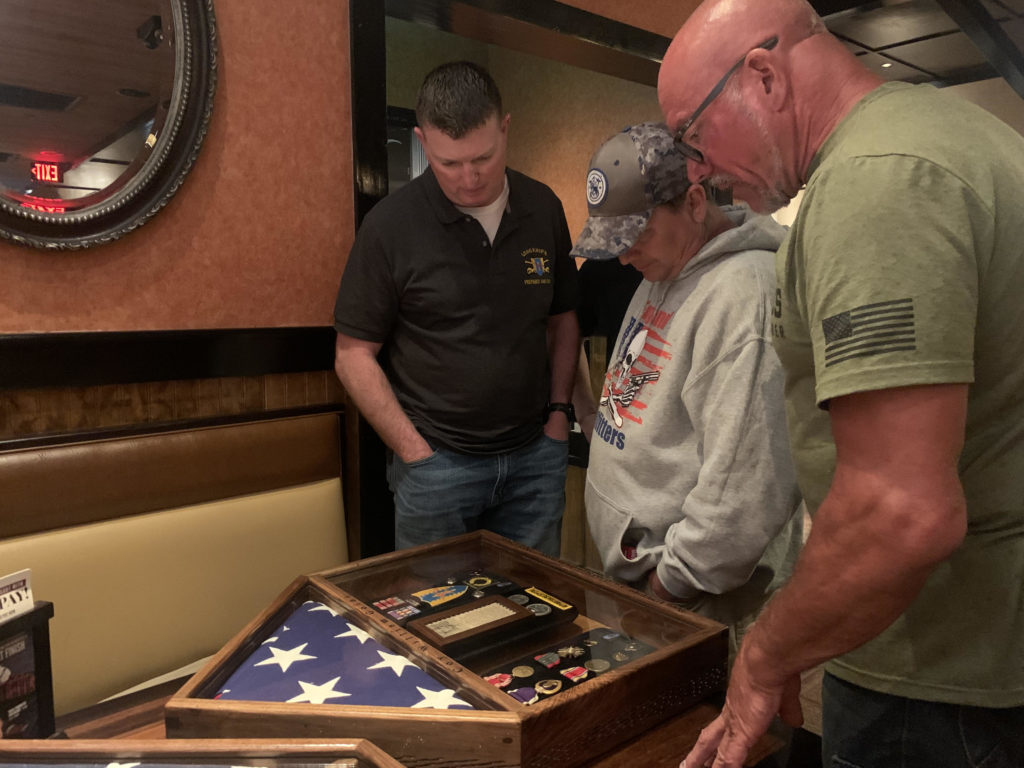 The two men made the nearly five-hour drive from Fort Riley, Kansas, to meet with the Precious Medals group and learn about Coy William Goins and the group’s efforts to return his service medals to the deceased World War II soldier’s family. During eight tours of duty during World War II, Goins participated in the Normandy invasion and the Battle of the Bulge. Twice wounded, he earned two Purple Hearts and two Silver Stars.

Barker and Banninger, both Purple Heart recipients themselves, felt a special connection to Goins because he was a member of their 4th Cavalry Regiment.

“The entire formation was moved by this,” Barker said.

The Siegrists presented the soldiers with the 4th Cavalry Regiment’s crest, Precious Medals coins and patches. Barker and Banninger reciprocated, providing certificates and spurs associated with the 4th Calvary for Goins’ family.

“It’s really validating to know what we’re doing means something to you,” Kim Siegrist told the soldiers.

“For me, this was a highlight,” Roger Siegrist said afterward. “These guys traveled five hours down and five hours back to spend three hours with us.” 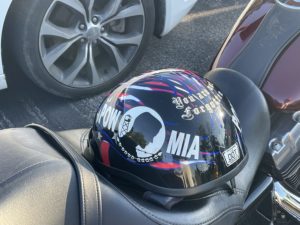 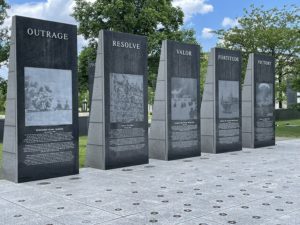 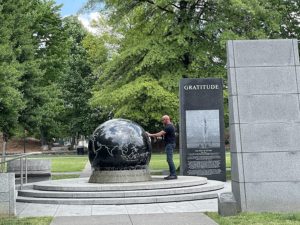 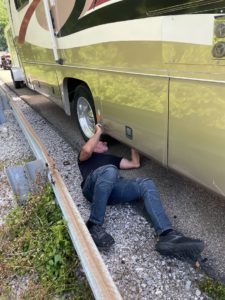 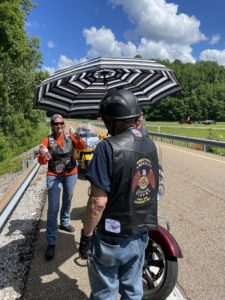 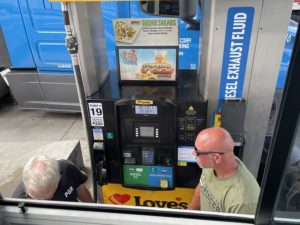 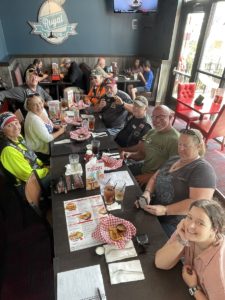 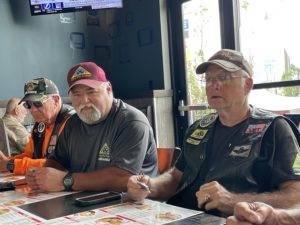 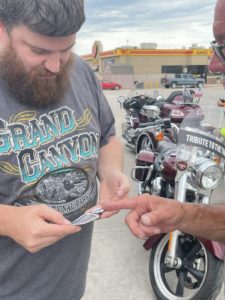 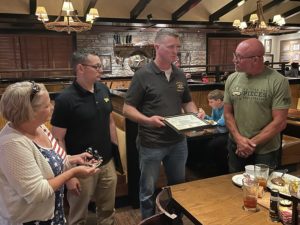 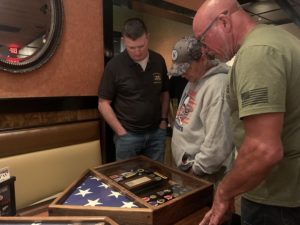 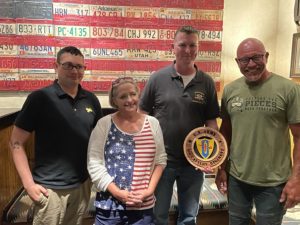 Sign up for our free daily email edition HERE.